The house in Sokoto, Nigeria, where the two hostages were held, came under heavy fire Continue reading the main story on BBC

Italy and Britain’s foreign ministers have moved to defuse a row over the UK’s failure to inform Rome of a planned hostage rescue bid in Nigeria.

Giulio Terzi and William Hague issued a statement saying Italy and the UK would continue to fight terrorism together.

Briton Chris McManus and Italian Franco Lamolinara died on Thursday as Nigerian and UK forces tried to free them from Islamists in Sokoto in Nigeria’s north.

Mr Terzi had asked Britain for “utmost clarity” about the operation.

He met Mr Hague earlier at a meeting in Denmark, and on Friday evening they released a joint statement.

It said Mr Hague had made it clear that there had been “a limited opportunity” to secure the release of the hostages whose lives were “in imminent and growing danger” and it had been possible to inform Italy only once the operation was already getting under way.

The statement went on to say: “Mr Terzi expressed deep sorrow and disappointment over the tragic outcome of the operation and both ministers agreed on the urgency of sharing full information to facilitate the reconstruction and understanding of these events.”

The urgency is evident from the fact that the raid took place in daylight. It was deemed too risky to wait even 12 hours for dark”

After the ministers’ meeting, Italian news agency ANSA reported sources from the prime minister’s office in Rome as saying Italy remained firm in its demands for clarity, but that it had no intention of escalating the diplomatic row.

The BBC’s Alan Johnston, in Rome, said this was the first sign that some of the heat may be going out of this diplomatic row.

The row – which has been rumbling since news first broke of the failed operation on Thursday evening – appeared to peak on Friday afternoon when the Italian president said it was “inexplicable” that the British government had not told Rome about the rescue attempt until it began.

Giorgio Napolitano said the UK needed to explain itself. 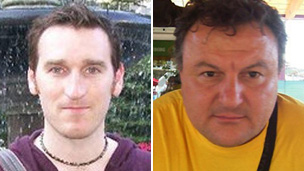 “The way the British government has behaved is quite inexplicable. To have failed to inform or consult Italy, with regard to a military action which could have such consequences,” he said.

“A clarification is needed on both the political and diplomatic levels.”

Earlier, UK Defence Secretary Philip Hammond said the attempted rescue had been launched after information was received that the hostages “were about to be moved – possibly executed”.

“These hostages were taken, they were held at an unknown location for a very long period of time despite extensive efforts to track them down.

“And when a window of opportunity became available, a well-trained Nigerian force with British support, went in and tried to rescue them,” he said.

Number 10 said the UK and Italy had been in contact ever since the men were kidnapped.

Gunmen seized Mr McManus, 28, of Oldham, Greater Manchester, and Mr Lamolinara, 48, in the town of Birnin Kebbi in the north of Nigeria on 12 May 2011.

They had been working for Italian firm B Stabilini in the construction of a local headquarters for the Central Bank of Nigeria.

The house where the men were being held had been under surveillance for some time.

But an unnamed official from the Nigerian state security service quoted in local reports said the hostages had died in crossfire.

Mr Jonathan said that the men’s captors had been seized and “would be made to face the full wrath of the law”.

He said they were from militant Islamist group Boko Haram, which has carried out a number of attacks on police, politicians and clerics who oppose it.

Reports have emerged that a senior member of Boko Haram was captured on Tuesday, and he gave information which led forces to the house where the two construction engineers were being held.

However, on Friday, a spokesman for the group told reporters that Boko Haram had not been behind the deaths.

“We have never taken anyone hostage. We always claim responsibility for our acts,” he said.

BBC security correspondent Gordon Corera said Boko Haram had become more violent and capable in recent years and there was a suspicion this might be a sign of the growing influence of the group known as al-Qaeda in the Islamic Maghreb.

Al-Qaeda in the Islamic Maghreb has a track record of kidnapping Westerners in north Africa and trying to extract ransom payments to fund its violence.